Voodoo Doughnut has been on the Doughnut Bucket List since the beginning of Doughnut Time. Ever since I saw them featured on some Food Network shows, I’ve been waiting for the day I had the chance to visit one of their shops. Originally founded in 2003 in Portland, Oregon, Voodoo Doughnut is as unique as they come in the world of Donuts. Voodoo’s vast array of doughnuts all come with original names and original flavors. Some of those doughnuts include Viscous Hibiscus, Voodoo Doll, Pot Hole, Voodoo Bubble, and Grape Ape. Voodoo Doughnut currently has 7 locations and I just read that one more will be opening soon at Universal Studios CityWalk in Orlando. It might be time to book another trip to sunny Florida.

My wife’s family owns a rustic cabin in the mountains of Colorado. Beautiful place. Every few years there is a two-week family trek out to spend time at the cabin and explore sites along the way. The first week is spent roughing it at the cabin without electricity or running water (except an ice cold spring). The second week is spent exploring other parts of Colorado, like Fort Collins, Colorado Springs, Salida, and Denver. I haven’t been able to take that much time off work at once, so on the last trip I flew into Denver and met up with the family. Because we were spending time in Denver before moving on, I knew that I had to find a way to get to Voodoo Doughnut. And I did. 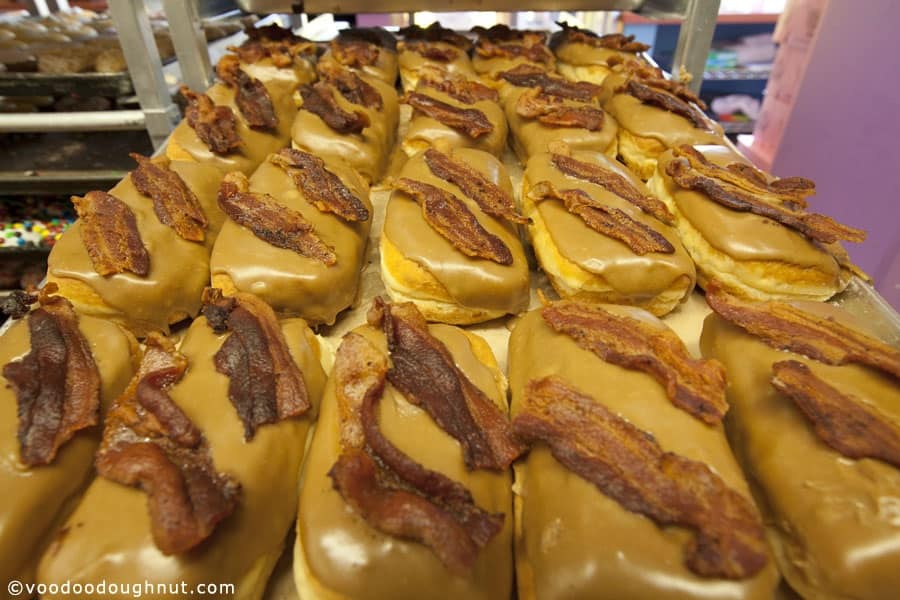 A Tray of Bacon Maple Bars©

As I drove down Colfax Avenue, which is apparently the longest commercial street in the United States, I caught a glimpse of the beautiful pink exterior of Voodoo Doughnut. I also saw that located directly next door was the Colfax Pot Shop. You have to give it up to all parties involved in the brilliant marketing and planning of this fact even if it wasn’t planned (location! location! location!).

Upon walking through the front door, you pick up on Voodoo’s uniqueness throughout the kitschy interior with nods to music, art, pop culture, and the pure “weirdness” that their founding city, Portland, proclaims. Lots of pink. Everywhere. I wish I had brought the family with me to see this amazing doughnut shop, but because our trip was packed with adventures, I had to sneak out extra early to fit in my doughnut adventure.

The toughest part of going to a doughnut shop is picking out doughnuts. They all look good to me! I never do well when pressed for a doughnut decision so when it was my turn to order I went all in and got two dozen assorted beauties to take back to the hotel for my family. Among the many of doughnuts were these flavors (as described on Voodoo’s website):

The Homer: Raised ring dipped in strawberry flavored icing and a smattering of round sprinkles

Ain’t That a Peach: Fried dough with peach chunks, covered in glaze and topped with cream cheese frosting and pink and orange sprinkles. 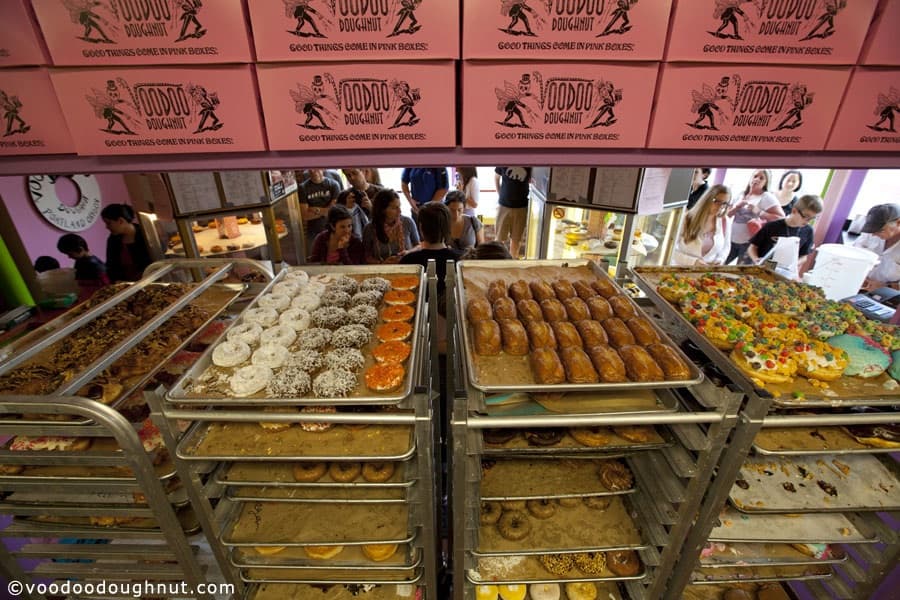 Let’s just say the family was elated and our sugar-fueled adventures in Denver went according to plan thanks to Voodoo Doughnut. We will be back again to this shop and to other Voodoo locations as well. 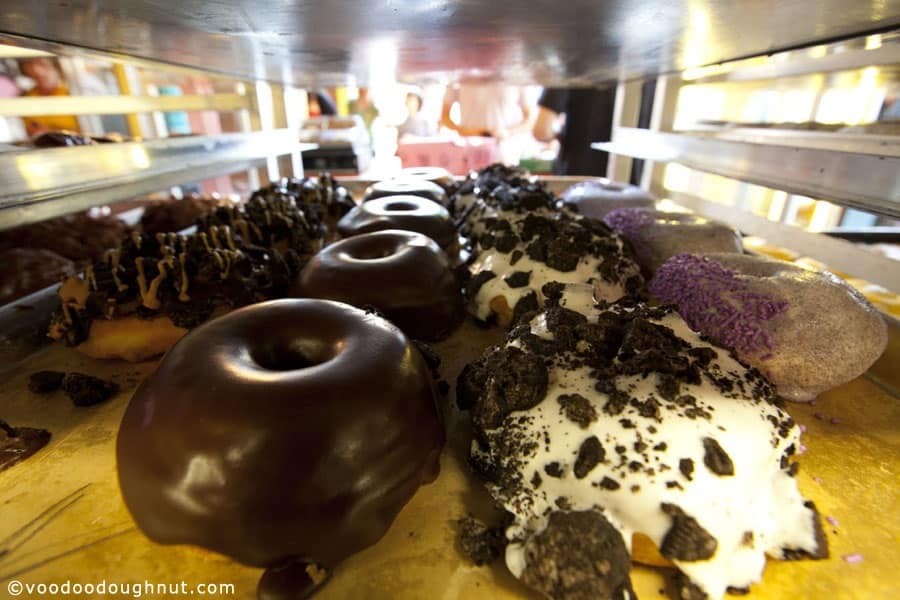 If you have the chance to visit one of their 7 locations, make sure you take time to enjoy the unique atmosphere and the experience that is Voodoo Doughnut.

Where should we visit on our next Doughnut Adventure? Let us know in the comments below!